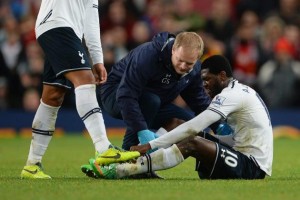 Injured in the hamstring in March, Emmanuel Adebayor has not played with Tottenham since his last match in English Premier League against Arsenal.

Announced on return against Liverpool, the Togolese hawk, 11 goals in 17 games, has not regained and finally witnessed the defeat (4-0) of his teammates in front of his TV station.

In inefficiencies in attack since the injury of the Togolese, Spurs entirely rely on his return to recover at the end of the season.

We’ve the thoughts of @E_Adebayor on his return to training and the games ahead: http://t.co/r4AZuP9Pxq pic.twitter.com/h5gqg6mXM5