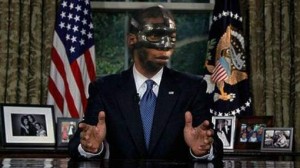 Dieumerci Mbokani helped Anderlecht win finally in the Champions League against Zenit St. Petersburg (1-0). And it was the same day as the re-election of Barack Obama.

As a result, Internet users  amused to circulate this photo on canvas the striker masked at the White House with the slogan:

“Champions League? YES WE CAN! ”