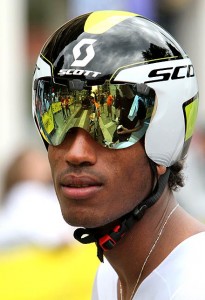 Africa Top Sports, en.africatopsports.com, the first panafrican and bilingual website organizes this year an award to nominate players in many categories as the best sportswoman of the year, best coach of the year and that of the sportsman of the year. There are many candidates including the footballers A.Ayew of Ghana, Didier Drogba and Yaya Touré of Ivory Coast, Samuel Eto’o of Cameroun.

The fan club of Teklehaymanot is so excited and is doing its best by encouraging people to vote for their idol.

However who really is this cycling wiz who captured the hearts of web users?

Teklehaymanot was a member of the UCI’s World Cycling Centre training program before signing for the new Australian cycling team GreenEDGE in 2012. He finished sixth overall in the Tour de l’Avenir in 2009. In 2010 he rode as a trainee for Cervélo TestTeam. The same year, he won the African Championships in the road race, individual time trial and team time trial, at both senior and under-23 levels. On the 2010–2011 UCI Africa Tour, he won the Tour of Rwanda and the Kwita Izina Cycling Tour.

He participated in the 2012 Summer Olympics being the first Eritrean competing in a sport other than athletics; he finished the road race in the 73rd position. In 2012, he became the first black from Eritrea to ride in (La Vuelta), one of the 3 grand tours. In 2012 he also became the first Eritrean to finish a grand tour (La Vuelta) and currently holds the record for the leading cyclist to be chosen for the Best African Sportsman of the year. 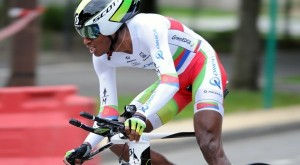 In 2008: he finished first at the Eritrean National Road Race Championships

In 2010: 1st at the African Championships Road Race

1st at the Overall Tour of Rwanda

In 2011: 1st at the Eritrea National Time Trial Championships 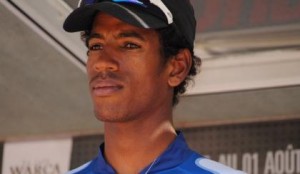 In 2012: 1st at the Eritrea National Road Race Championships

Due to all his performances in the domain of cycling, people think that he is the most favorable for this award which will be an occasion for the African cyclist to be well known as well as his discipline. He is encouraged by all the Eritreans. Here are some of the comments about him, left on our website by his fans:

“Daniel is the best one from all of africa”

“I vote for Daniel Teklehaymanot of Eritrea. I like cycling and he is my hero”

“Guys, let us be fair now. We know that soccer and athletics (long distance) are our sport. Africa was vanished for ages in sports like cycling and so on. Despite many resources and lack of managements, we start to emerge in big grand tours for the first time by a black African rider from a tiny and poor country, for instance in vuelta Spain. Please let us vote for the hero Daniel Teklehaimanot of Eritrea, the first black professional cyclist

“Daniel Teklehaimanot had an excellent year. He is making a name for himself in cycling       and for Africa in general. I hope he wins athlete of the year. Good luck Daniel”

“Daniel TekleHaimanot the pride of Africa. The single black African to represent Eritrea and Africa in the London Olympics 2012” 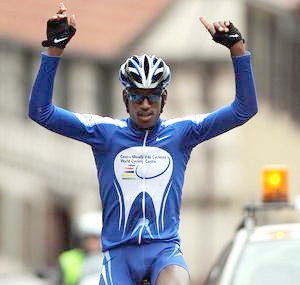 All those comments showed that people really like what Daniel Teklehaimanot is doing although he is not well known by all because of his sport which is rather developed in the other continents especially in Europe than in Africa. He got so much support also because he is the first black to attend one of the most important cycling competitions in the world. We wish good luck to all the candidates.