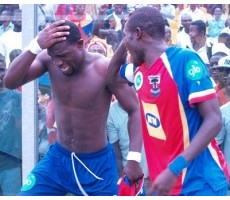 Though attention will be on the long title race this weekend, the final Glo Premier League games of 2012 would also focus on the relegation scrap.

Both ends of the table continue to produce interesting twists and turns and the dramatic last weekend is expected to be no different from the start of the league.

The competition heads into the penultimate stage of the first round with matches on Saturday and Sunday.

Two fixtures will come on Saturday as Wa All Stars who are struggling to move clear of the bottom ranks of the table welcome AshantiGold to the Wa Park.

The Blues, at home will be challenging for all three points while a win for the Miners could lift them into the top four before the next day matches.

Real Tamale United sitting at the foot of the table and winless in 13 matches could steal a win finally at the Baba Yara Stadium against Liberty Professionals who were 5-1 winners over Berekum Chelsea on Boxing Day.

On Sunday, Hearts of Oak who are two points clear of the drop could be sent into the relegation zone if they fail to win their last league match before the turn of the year.

The Phobians, winless in their last five consecutive games meet with Medeama at the Accra Sports Stadium and a defeat could push them down if Tema Youth win at home.

The Kumasi derby will see Asante Kotoko attempt to continue their climb up the table when they battle King Faisal.

Tema Youth caught up in the relegation fight will take on Berekum Arsenals at the Tema Stadium.

After two successive defeats, Ebusua Dwarfs will try to get it right when Heart of Lions comes visiting at the Robert Mensah Stadium.