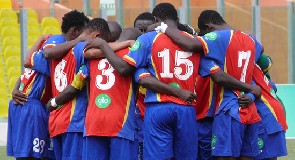 The 19 time champions finished 2012 in the relegation zone after losing 3-1 to Medeama Sporting Club at the Accra Sports Stadium on Sunday.

Skipper Mahatma Otoo drew Hearts on level terms after Joseph Gordon had shot the visitors ahead.

But Lugard failed to deal with two innocuous efforts from former Hearts midfielder Eric Nyarko and Joseph Gordon as the Phobians slipped to their sixth defeat of the campaign.

“He is young and still learning and he made mistakes in the games. There were certain balls he should have dealt with. He was disappointing,” he said.

Experienced shot-stopper Sammy Adjei is expected to replace him for Hearts’ final fixture of the first round against King Faisal at the Baba Yara Stadium on Sunday.