“In the battle to reach the Premier Division, East Grinstead and Harleston Magpies look likely to finish in the top two of the Maxifuel Women’s Division One table”.

Reading team open’s the match or their account through Becky Halle after ten minutes, they doubled up their lead four minutes in which Lindsay Molyneux scored a goal for her team. They went three-nil up through Sam Quek Quek before Leicester took desperate measures to claw their way back.

Reading defence was firm and they booked their place at the final at Wembley on January 27.The Reading team gained revenge for their loss in which they beat reigning champions Leicester 3-2 in a nail-biting match in front of a capacity crowd during the finals last year.

In the match the Reading team are lead with two-nil at half time, they held their nerve in the second period to clinch a 3-2 victory despite Leicester hitting back hard in search of a way back into the match. 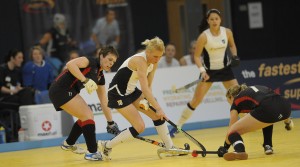 Later stages in the game, Leicester took off goalkeeper Maddie Hinch and resorted to playing Hannah Smith as a kicking back in search of a vital goal, and they hit the net twice in the final six minutes through Jo Hunter and Nic White.

During the days other semi finals has been scored by the Sutton Coldfield twice in the last 30 seconds to book their place in the final against Reading.

There were thrilling finishes to both semi finals in the Women’s Maxifuel Super Sixes Championship, which ended with Reading and Sutton Coldfield securing victories at a packed Arena Sport in Kettering on Saturday evening.