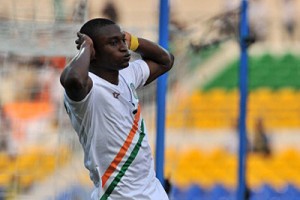 Ghana cruised past Niger with a classy 3-0 win that also saw the Black Stars advance to the knockout rounds of the 2013 Africa Cup of Nations as winners of Group B.

It was always going to be a difficult task for Niger to contain the favourites, but life was made even more difficult when Asamoah Gyan netted six minutes in. The defence was caught napping as Mohammed Rabiu burst down the wing and picked out the former Sunderland star, who fired past Kassaly Daouda from a tight angle.

Moussa Maazou looked to have equalised more or less immediately only to see his goal ruled out for a foul on Ghana goalkeeper Fatau Dauda, and from then on there was no stopping Ghana. Christian Atsu compounded the Menas’ misery by doubling the Black Stars advantage, taking down a fine cross on his chest before using the outside of his left boot to plant a lovely finish just inside the far post.

And the game was over as a contest just after halftime, when John Boye made it 3-0 by tapping in from close range after Daouda failed to deal with a Gyan header. After the disappointment of blowing a 2-0 lead against the Democratic Republic of the Congo in the first match, it now looks like Ghana are firing on all cylinders. They’ll face Cape Verde in the quarterfinals.