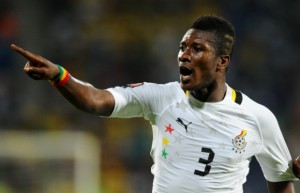 The Ghanaians opened the score in the 10th minute. Adomah centers in the Nigerian surface and find Asamoah Gyan.

The latter controls the ball, positions himself and hit a cross shot that deceived the vigilance of Kassaly. The striker of Al Ain Club is named Man of the Match by the editorial staff of africatopsports.

At the 23rd minute, Gyan threats once again the Nigerian defense. He made a decisive pass to Atsu who scored the second Ghanean goal and the third one 26 minutes later by Boye although the fact that Kassaly strikes a lot.