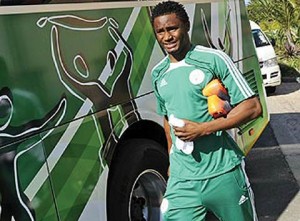 After helping Nigeria to beat Burkina Faso 1-0 at 2013 Afcon, John Mikel was voted the man of the match by Africatopsports and CAF.

Sunday scored the first goal in the final of Orange Africa Cup of Nations by the help of Moses smashing a shot at goal and the ball deflects to Mba, who terrifically flicks the ball over the challenge of the defender before stabbing the ball into the far corner with a left-footed strike! 1-0 Super Eagles!

Sunday Mba is the first non-Egyptian scorer in an Africa Cup of Nations final since 2004.

John Mikel a Nigerian footballer, who plays as a midfielder for English club Chelsea and the Nigeria national team.

His failure to show up for any of the qualifiers again setting off some controversy with the U-23 team coach Samson Siasia, who dropped him from the Olympic squad amidst significant furor from the media. On 5 June 2010, Mikel was ruled out of the World Cup due to injury. He had been struggling to shake off a knee problem after undergoing surgery in May, though there were also reports that an ankle injury was to blame for Mikel’s withdrawal.

He was called up to Nigeria’s 23-man squad for the 2013 Africa Cup of Nations.