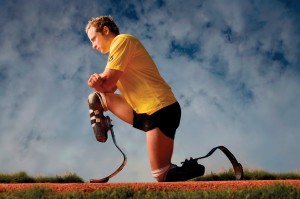 Another bizarre twist to the Oscar Pistorius soap opera, a first cousin of the judge in the case reportedly has killed herself and her two young children with poison, adding another head-shaking layer to a case that some are calling the biggest story in South Africa since Nelson Mandela walked out of prison.
The bodies of Anusha Maharaj and her two sons were found Sunday at their home. Magistrate Desmond Nair, who is presiding over the Pistorius case, confirmed that the woman is a first cousin.
Pistorius, the so-called “Blade Runner,” is accused of killing his model girlfriend Reeva Steenkamp. He was released on bail last week.
Stories in the South African media have listed strange occurrences in the case:
Pistorius’ brother Carl faces his own charges of culpable homicide over a 2008 car accident that killed a female motorcyclist.
The lead investigator in the case, Detective Hilton Botha, had to be replaced after it was revealed that he’s facing seven counts of attempted murder stemming from him and other officials shooting into an occupied bus while he was drunk.
Prosecutor Gerrie Nel was arrested for fraud while pursuing a corruption case against South Africa’s top cop, but the charge was later dropped.
Pistorius’ aunt Micki Pistorius is a criminal profiler who says she has extrasensory powers that help her detect killers.
“From our view, South Africa hasn’t had that many heroes to be proud of since Nelson Mandela. We’re kind of desperate to hold onto every hero,” Max du Preez, who founded and edited Vrye Weekblad, an anti-apartheid newspaper that uncovered death squads, told the Christian Science Monitor.
Du Preez, who has been a journalist for 25 years, thinks the Pistorius trial is proving to be the nation’s biggest-ever story. It’s a case that not only involves a national hero and a beautiful blonde, but it also shines a light on the cloistered world of South Africa’s wealthy white elite, who live behind security walls out of public view.
“Historically, that [Mandela’s role] was more important but, in terms of citizen obsession, this is the biggest,” he says. “It’s about the uniqueness of the man. He overcame his disability. He had the personality to match. He was humble, well spoken. It was such an inspiration.”