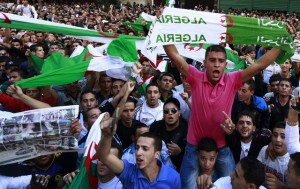 The Algerian football team will face on tuesday its counterpart of Benin counting for the third day of the playoffs of 2014 FIFA World Cup. At the end of the technical meeting the Greens’ selection will be in white while the squirrels will be in yellow.

“The national team will completely be in white uniform while Benin will be dressed in yellow on Tuesday at Mustapha Tchaker stadium at Blida for the third day of the playoffs of the 2014 Brazil World Cup. The decision was taken at the technical meeting before the match that took place on Monday in the presence of representatives of both teams“, said an official statement of the Algerian Federation.