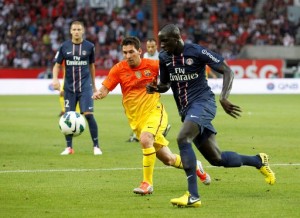 More than just a charity match on Tuesday for the first leg of the quarterfinals of the Champions League Europe, the encounter Paris Saint-Germain and FC Barcelona will be a much expected.

This is the main display of the draw of the competition. Not only just a game between two players, Zlatan Ibrahimovic and Lionel Messi who already know each other at the Camp Nou, but also a clash between two Afros.

Africa Top Sports offers a review of effective Afros to follow in the quarter-finals history.

Even if he has a little playing time at Camp Nou, the Cameroonian Alexander Song is the only African in the Blaugrana. Glued to bench especially during matches in the Champions League, the former Arsenal player does not seem to be the right choice of the staff of FC Barcelona. In case of injury for Xavi, Iniesta and Busquets , he could enter.

The Franco-Angolan does not miss any game of his club. Blaise Matuidi combines games with the Parisians and even the selection of the Blues. Beautiful mastery, technical, lively, beautiful look, dominant game orientation, the left of the Blues and Red of France could be the key to the game. He will keep the midfield.

Placed on the list of the Parisians in the Champions League in the offseason, the left side of PSG, Siaka Tiene has a status of the replacing of luxury. The Ivorian is still blocked by Maxwell.

He sometimes wishes to leave because of his dark status with his club. Mamadou Sakho but loves these kinds of challenges: to play a crucial match. The Franco-Senegalese underwent a monsterous challenge with the Brazilian, Alex and Zoumana Camara to a lesser extent. Not sure that he will included in the axis of the best men of his time, the Brazilian Thiago Silva. His rigor can be decisive.

Zoumana Camara, could be aligned if the holders are wounded. He counts  a few bits of games with Paris Saint-Germain.