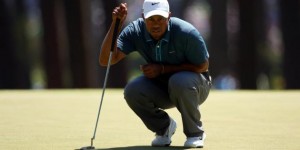 The World No. 1 of golf finishes the first Grand Ghelem of the season in the 4th place. Tiger Woods has not won his fifth Masters in Augusta.

Tiger leaves the star turn to Adam Scott who became on Sunday the first Australian to put on the green jacket. It is with regret that he comes back on his performance of this 77th Masters in Augusta. “I played well throughout this tournament but I was determined to make a final score of 65 and I did not succeed in doing it. If I had achieved this goal, the story would not probably have been the same. It is a pity, because I had a chance, “said Tiger Woods still seeking for his 15th career Major.