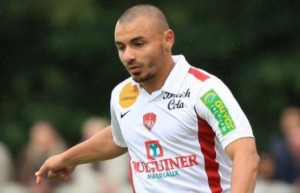 A new swat for Brest. Already on the way to relegation and League 2, the club of the Finistère lost its best players. The Algerian Brahim Feradj injured Saturday in Montpellier; will be operated of the meniscus on Monday. Its unavailability is estimated to 4 weeks.

As far as to say that his season is over. He who believed that there are still a few days to play with Brest. Same fate for David Arras who was also injured and will be out for ten days. But not much hope to see him on the lawn until the next season.