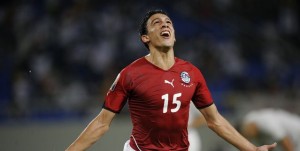 Ihab Ali, Al Ahly of Egypt doctor revealed that Mohamed Nagy Gedo will soon be operated this week and will be unavailable for at least four months. Lent this season to the English club of Hull City, with whom he won Sunday, the promotion in the Premier League, Gedo suffers from foot pain.

“Gedo had this injury before joining Al Ahly in 2010 and was supposed to rest, but the coaching staff continued to make him play the aggravating the injury,” said Ali. “He will be operated this week and I am sure it will be for 4 months. I warned them to treat him but nobody listened to me, “said the doctor.

Gedo will miss the playoff games of the Pharaohs in June. Not good news for the coach Bob Bradley.