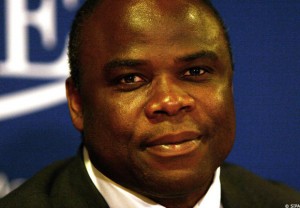 Even if he says to be from Marseille in the blood, Basile Boli has a watchful eye on the PSG.

For the Franco-Ivorian, the team from the capital that has been crowned champion of France is the only team that can guarantee the European Cup to France today.

The former defender of the club does not see appreciate, the attitude of some PSG players who do not show fidelity to the club. Today in France, Boli indignant against these behaviors said:
“In Paris, it is very difficult to match. The guy, he spent one year and he wants to leave. The kid of 6 years, he just begins to play football by saying he wants to be Zlatan and tomorrow, Zlatan will perhaps be in a new jersey. There is no story. Rai, Weah, Ginola or Pauleta them, they told a story. “