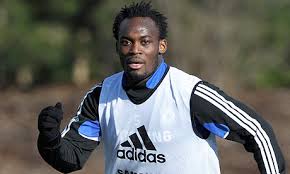 Ghana International footballer Michael Essien is set to organize his second Charity Football match on June 8 in Accra, Ghana. The charity game themed “the Michael Essien Foundation Game of Hope and Inspiration” is aimed at raising funds for five African charities yet to be determined.

Michael Essien, the Chelsea player, a well-loved in his home country spent this season on-loan at Spanish giants Real Madrid and he is set to return to Chelsea when the season ends. The game will be played between an African IX versus World IX and the star is set to bring many of his Chelsea and Real Madrid team-mates to Accra for the game. Other ex African football greats are set to feature in the game as well.
Michael Essien is an African Union Peace Ambassador. During last year’s game stars such as Chelsea team mate Ashley Cole, African stars Emmanuel Adebayor, Kano Nwankwo and Algerian legend Raber Madjer were in attendance.
Additionally international R&B singer Wyclef Jean is billed to perform in a musical event after the game to raise more funds for the showpiece.
Essien’s charity organisation-Michael Essien Foundation- has already undertaken many projects such as opened public toilets, begun work on a library and helped renovate a hospital in his hometown of Awutu Breku.
Local mobile phone distributor TECNO phones has already signed on as a sponsor for the game.