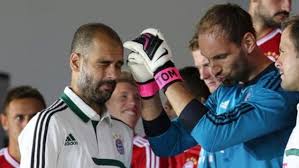 Just arrived in the Bavarian club, has Pep Guardiola already made enemies?

Considered and respected by the players, the former coach of Barcelona is not immune to some dangerous reactions of some players who do not necessarily fit into his plan.

The first is the replacement goalkeeper of Manuel Neuer, Tom Starke. This slapped involuntarily his coach. Fortunately, he escaped unharmed. An action that can still deprive the last German bastion from the goal of Bayern Munich despite his apologies