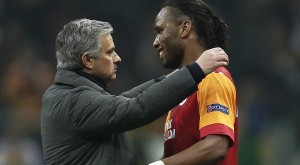 Jose Mourinho does not abandon the idea of making Didier Drogba come back at Stamford Bridge. Return at the head of Chelsea, “Happy One” had contacted the Ivorian striker for a new episode with the Blues. But Galatasaray player declined the offer arguing that he is “very happy” in the Turkish club, confided his advisor Ceylon Caliskan.

However, this statement has not dampened the determination of Mourinho who should propose a new project to his former protected. To believe the Daily Mirror, The Special One would have concocted a player-coach contract for the Elephant of 35 years. The former coach of Inter and Real would be willing to wait until the end of the contract of Didier Drogba in Galatasaray (June 2014) to start this new tandem.

Mourinho is the principal architect of the arrival of Drogba at Chelsea in 2004. The center-forward, voted best player in the history of Chelsea by the fans gave the club their first trophy of the UEFA Champions League before heading to China. The Portuguese technician thinks he can still evolve in high level.