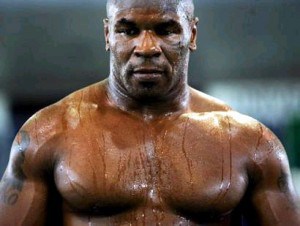 Mike Tyson, the former world champion heavy weight is wrong, very is sick. He admits having been addicted to alcohol.

He just tells the world: “I am about to die because I am suffering from a vicious alcoholism, Tyson launched at a press conference in New York. I did not drink or take drugs in six days, and for me it is a miracle. I lied to everyone who thought I was sober. This is my sixth day of sobriety. I’ll never touch it. “

“I’m a bad boy sometimes. I did a lot of bad things and I want to be forgiven. I want to change my life. I want to live a sober life. I do not want to die. “

Having boxed, looked quite for his way, the former terror of rings, the heavyweight champions Mike Tyson launches into cinema as Africa Top Sports.com had reported a few days ago. We then ignored his health problems.

And for his first role, he chose Africa!

It should normally shoot a movie in a month hence in Oran the movie entilted“Algeria forever” “directed by the French director Jean-Marc Minéo.

The film would hit theaters in 2014. It is produced by Zakaria Ramdane of “Access V Production”. The film tells of a plot against the Algeria of nowadays. A supporter of the OAS, illegal structure which was designed to maintain the French Algeria, moved to Oran where he created a mafia organization to hit the country. But he faces a super secret agent, martial arts expert, ready to do anything to defend Algeria and destroy this organization.

Mike Tyson had the opportunity to discover the beautiful French singer Lorie – “The Positive attitude”and the funny comedian Smaïn.

He became in 1986 at the age of 20 the youngest world champion in the heavyweight history. But after his life has become a real novel: prison for rape, drug addiction, fights.

We cannot wait to find out this in this new role …

That means he has overcome his problems with alcohol…