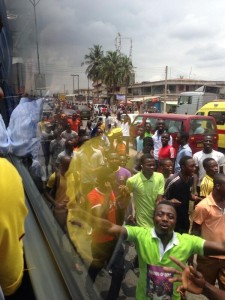 Kumasi today welcomed the Black Stars of Ghana in a grand style. The team touched down to cheers of hundreds of supporters who had gathered to welcome the Black Stars (picture from Andre Ayew Twitter). The loudest cheer went to Michael Essien, Kevin-Prince Boateng, Andre Ayew and captain Asamoah Gyan as the players emerged one-by-one from the aircraft.
The players and officials held hands in a circle to offer prayers on the tarmac before climbing onto their bus amidst the growing cheers from the excited crowd. Ghana FA boss Kwesi Nyantakyi led the delegation alongside some members of Executive and Black Stars Management Committee. The groups within the gathered crowd  were holding  up placards and  banners depicting support for their individual players in the Black Stars.
Others were also wielding banners to welcome back Black Stars returnees Michael Essien, Kevin-Prince Boateng and Andre Ayew. The team drove straight from the airport to the Kumasi Children’s home where a donation was made before heading to their camping base at the Golden Tulip Hotel.