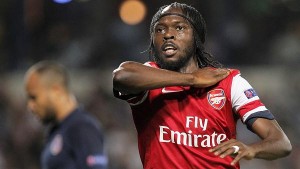 Former Arsenal winger Gervinho has hit out at Arsene Wenger, claiming it was his fault that the Ivorian short career with Arsenal ended in disappointment. After suffering through two underwhelming seasons in England, Gervinho signed for the Serie A side during this season’s mid-year transfer window for £7million.
The forward managed to score just nine goals in 45 appearances for the Gunners, and many at the Emirates were disappointed with his contributions in the Premier League. However, the Ivory Coast international has now provided some explanations for his lack of form in England over the last two years. “My position on the wing was not what I was expecting, and I wasn’t happy with it,” he told The Sun. “It would have helped had he (Wenger) shown more confidence in me“.
As the north London club continued to sign other attacking players like Olivier Giroud, Lukas Podolski, and most recently Yaya Sanogo, Gervinho saw his role in Wenger’s side become less and less significant, and he began to struggle to find game time and a starting place in the team. The 26-year-old, however, will now be hoping that with regular game time in the Italian capital he will be able to enjoy what should be the prime of his career.
“Wenger was not prepared to give it [game time] to me,” the former Lille man continued, “I was not getting much time on the pitch and was in need of this time to improve and play my best football.”