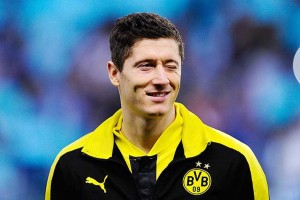 Borussia Dortmund striker Robert Lewandowski confirms he will sign a pre-contract agreement withBayern Munich in January. Lewandowski revealed his desire to join the German and European champions over the summer, but accepted he would have to remain at Dortmund until next year when his contract expires.
The 25-year-old has reportedly already agreed terms on next summer’s switch to the Bavarian club and had no reservations in making his intentions clear.
When asked by German SPORT1 television channel whether he could announce his switch to Bayern, the Poland international responded: “Yes, because then I can officially sign a contract.”