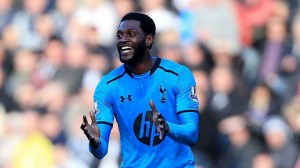 Another great performance from Emmanuel Adebayor in the Premier League on Wednesday. The Togo striker scored twice in an impressive 4-0 victory of Tottenham over Newcastle. Already at the break, his 7th goal of the season helped the Spurs take the advantage.

On resumption, Adebayor is also involved in the second goal for his team. His shot blocked by the goalkeeper Magpies benefits Paulinho doubling the bet. While Tottenham suffer the end of the game, Adebayor is still there to give air to his team. A volley that will fit into the side netting of Tim Krul.