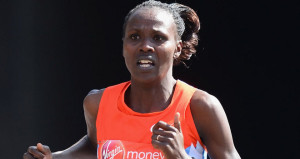 Ethiopians and Kenyans were advertised as favorites of the 8th edition of the Half Marathon in Ras Al Khaimah that took place Friday in the United Arab Emirates. Athletes of eastern Africa have confirmed their status by winning the men’s and women’s race.

In men, the Ethiopian Lelisa Desisa winner of marathons in Dubai ( in 2h04’45 ”) and Boston in 2013, won by approaching his personal best with four small seconds ( 59’34 ” against 59’30 ”) at the end of a run more and faster. He beat seven other African athletes. Ethiopian champion outperformed the Eritrean Nguse Amlosom who improved his personal best by more than a minute (59’38 ” 60’46 ” against ). Kenyan Wilson Kiprop is the third in 59’44 ”. They are eight to get down in time, confirming the status of the event organizers who describe it as “world’s fastest” in this distance .

In women, the victory went to the Kenyan Priscah Jeptoo who covered the distance in 1h 07min 02s. After completing the last 1.1 km 3mn 17s, she leaves her runner and fellow Flomena Cheyech behind with more than one minute ahead (1h08mn13s).