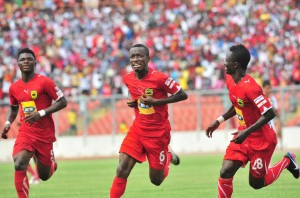 For the third time in a row, Asante Kotoko won the Ghanaian football championship Wednesday. And thanks to his victory over Edubiase United (2-1) with two games remaining in the competition. The Pork porcupines now have 54 points, seven more than heir nearest rival Heart of Lions.

Double champion of Africa, Asante Kotoko, the most successful club in Ghana, thus win their 23rd league title and enjoys now three titles more than their eternal rival, Hearts of Oak, who occupy the third place in the standings with 10 points adrift of the champions.

Both teams will compete on June 1 at Baba Yara Stadium in Kumasi, the lair of Kotoko, who could with a win over Hearts of Oak offer a cherry on the cake for the celebration of this title.