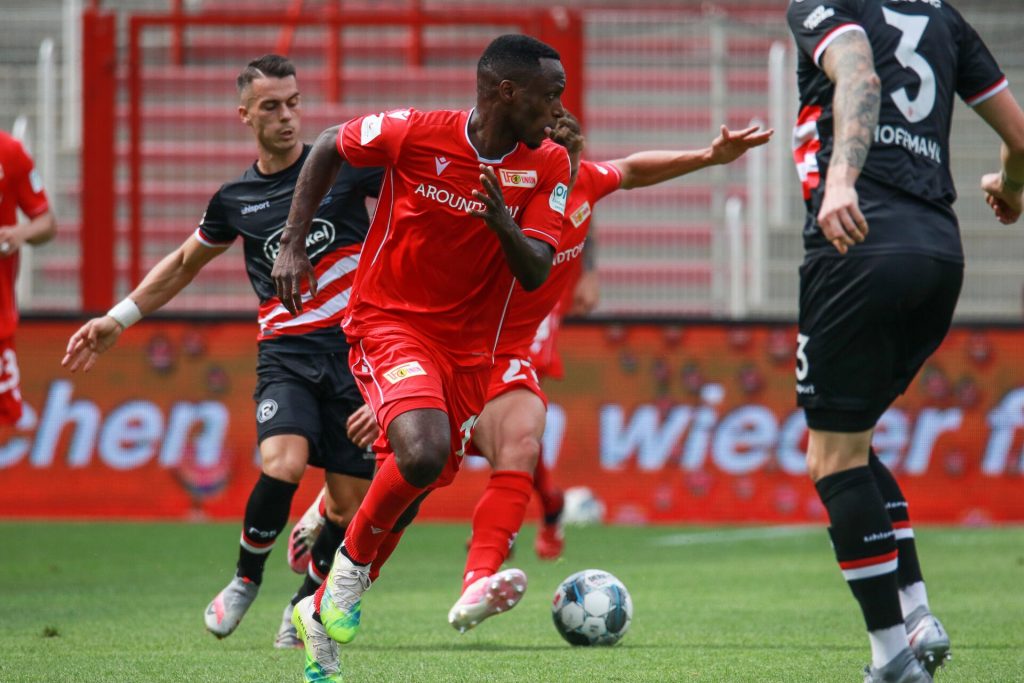 It was another busy weekend of football for Nigerian players in Europe league as efforts are in top gear to end the current season.

Matches are being played at the average of two days as players and club officials are sweating or out to meet up with the tight match schedules.

For Nigerian players in Europe leagues, the work continues as they are helping their team to either book European competition ticket, avoid relegation or push for promotion.

Africa Top Sports monitored how Nigerian players performed for their clubs over the weekend in major Europe leagues.

In the German Bundesliga which just ended, Nigerian forward Anthony Ujah wrapped up the season with a goal.

Ujah scored in broke the deadlock for Union Berlin in the 26th minute in Union’s 3-0 victory at home against relegated Fortuna Dusseldorf.

The victory saw Union Berlin remains in the German top-flight league having finished 11th on the league table.

Kingsley who has been a regular first-team player, however, was booked in the 57th minute.

Despite the annihilation, Koln still finished 14th in the Bundesliga while the victory helped Werder Bremen to book a play-off place.

It was a poor ending for Jamilu Collins and his Paderborn 07 teammates as they were relegated to the Bundesliga second division.

Jamilu who has been a regular player in the defence played full time as they were defeated 3-2 by Eintracht Frankfurt.

Paderborn finished at the bottom of the table with just 20 points and will return back to the second division having gained promotion to the top division this season.

In Spain, Samuel Chukwueze was at his best for Villarreal who bounced back to winning ways after dropping points against Sevilla in their last LaLiga match.

Chukwueze was involved in Villarreal opening goal in their 2-0 win at the Estadio De la Ceramica against Valencia.

The 21- year old, however, did not complete the game as he was replaced by Javier Ontiveros in the 89th minute in a tactical substitution.

Ramon Azeez was an unused sub at the Estadio Nuevo Los Carmenes as Granada suffered a 2-1 defeat at home to Eibar.

Chidozie Awaziem returned back to the Leganes starting XI who were defeated 2-1 by Osasuna.

It was Awaziem’s 22nd league appearance of the season and he played just 46 minutes before he was substituted out.

His compatriot, Kenneth Omeruo watched from the bench as he was unused.

They are in the drop zone in 19th position on 25 points, seven points from safety.

In the Italian Serie A, Ola Aina was drafted to play forward alongside Belotti as Torino suffered 4-2 away loss to Cagliari.

It was surprising seeing the defender drafted by forward by Torino manager, Moreno Longo.

Aina did well in his new role and was replaced by Wilfried Singo in the 74th minute.

It was Aina’s 23 appearances for Torino this season as the club are six points away from the relegation zone.

William Troost-Ekong returned to the starting for Udinese who loss 3-2 at home to Atalanta.

Ekong who was an unused substitute in the game against Torino returned to the squad in his 24th league appearance for Udinese.

He played for 66th minute before he was replaced by Rodrigo Becao.

In England, Odion Ighalo scored his fifth goal for Manchester United as the Red Devils defeated Norwich City 2-1 at Carrow Road to reach the semi-final of the Emirates FA Cup.

It was Ighalo’s fourth start for Ole Gunnar Solksjaer squad.

He scored the opening goal for United in the 51 minutes before Cantwell levelled for the Canaries.

A Harry Maguire last-gasp goal in extra-time propelled Manchester United to the FA Cup semis where they will play Chelsea.

Wilfred Ndidi was part of Leicester City squad that crashed out of this season’s FA Cup following a 1-0 loss at the King Power Stadium to Chelsea.

Ndidi had a goal-bound header saved by Chelsea goalkeeper, Willy Caballero in the game.

He played full time for the Foxes who will now focus on booking a UEFA Champions League ticket for next season.

Henry Onyekuru was an action for 90 minutes as Galatasaray held hosts Istanbul Basaksehir to a 1-1 draw.

It was Onyekuru’s 10th league appearance since his return to the club on loan from Monaco.

The Super Eagles forward struggled to adapt to football in the French Ligue 1 following his departure from Galatasaray.

Since his return to the Turkish league giants, he is gradually finding his rhythm and has scored just one goal.