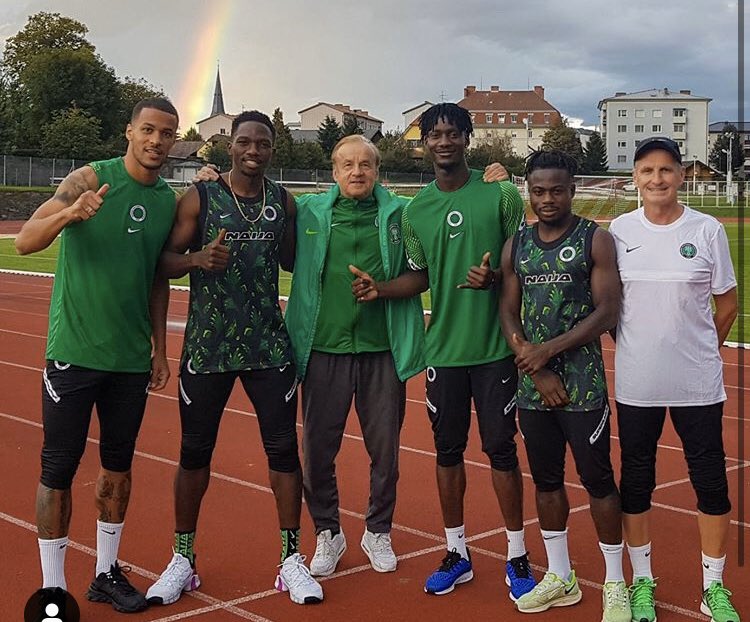 Super Eagles camp in Austria ahead of the international friendlies against Algeria and Tunisia is already bubbling following the arrival of more players.

Surprisingly, Hoffenheim defender Kevin Akpoguma who recently switched his allegiance t0 play for the Super Eagles was around to familiarise with his new teammates.

The former German U20 captain arrived the Austria based camp and was well received by his teammates despite not being called up by Gernot Rohr.

Rohr will be without the service of his most trusted midfield duo, Oghenekaro Etebo and Wilfred Ndidi who are out due to injury.

Another player that will be missed is the team currently highest goal scorer, Victor Osimhen who was excused.

In the place of Ndidi, Tyroone Ebuehi has been called up while Paul Onuachu replaces Osimhen.

Rohr is yet to announce the player that will replace Etebo who injured while on duty for Galatasaray on Sunday.

The Super Eagles will file out against the in-form Fennecs at the Jacques Lemans Arena on Friday before taking on 2004 African champions Tunisia at the same venue on Tuesday next week.

Friday game will be the  first time the Super Eagles will be involved in action after almost a year with the coronavirus pandemic shutting down football globally since the month of March.

They were already preparing to take on Sierra Leone in a double-header AFCON qualifier in April before football activities were suspended in the continent by CAF.

The game has now been scheduled to hold November.

Meanwhile, the Nigeria Football Federation (NFF) in a statement on Monday revealed that organisers of theb Match Eurodata Sport has clarified that no fan will be allowed inside the stadium.

Both games will be played behind closed doors in conformity with extant protocols on the coronavirus pandemic.

In another development, NFF urged television stations that wants to air the matches live to contacts the federation.

“Meanwhile, the Nigeria Football Federation has called on television stations interested in bringing the matches live to the homes of Nigerians to immediately contact the Federation on the modalities to achieve this.

“Interested stations can contact the NFF’s Assistant Director/Head of Marketing, Alizor Chuks on 08036018023. Both matches will kick off at 8.30pm Austria time (9.30pm Nigeria time).”

The other invited players were being expected in camp by Monday night.