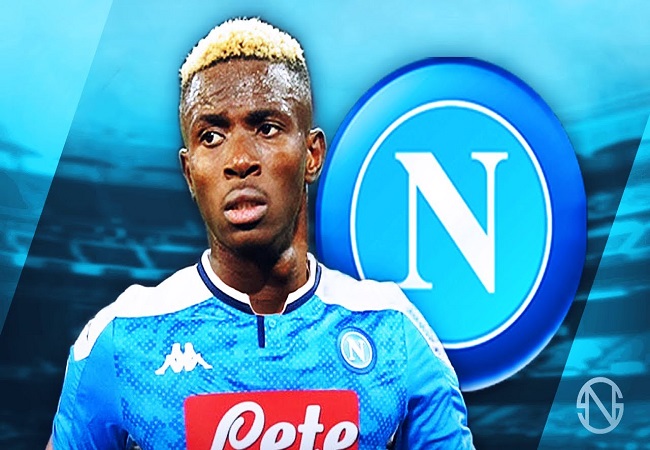 Victor Osimhen is yet to recover from a dislocated shoulder he suffered while on international duty with Nigeria in November.

According to the club’s sporting director Cristiano Giuntoli, Napoli are expecting The 21-year-old striker to return to action in January 2021. As he continues his rehabilitation process.

Osimhen dislocated his shoulder last month while in action for Nigeria in an Africa Cup of Nations qualifying fixture against Sierra Leone. A health matter that consequently made him miss their last nine matches across all competitions.

Since his big money from Ligue 1 club Lille to Napoli in August, the Nigeria international has made eight appearances for Gennaro Gattuso’s side. And he has two goals to his name in Serie A.

Napoli have suffered back-to-back defeats in their last two league outings. And they will still be without their summer-signing for the final match of the year, against Torino on Wednesday.

The Italian league will go on its winter break after Wednesday’s fixtures until January 3. And Osimhen might return to Gattuso’s team before their trip to Cagliari next Sunday.

When asked about the condition of the Nigerian forward, Giuntoli told Sky Italia via SOS Fanta. “Osimhen is still not well. We are waiting for him at the beginning of 2021.

“At what point of the month is he back? We are waiting for him at the beginning of January. I don’t know when he will come back. We will see in what conditions it will be and we will evaluate.”

In Osimhen’s absence, Napoli have won just four of their nine matches in all competitions. And they are ranked fifth on the Serie A table with 23 points from 13 matches.

Earlier this month, the former Wolfsburg and Sporting Charleroi striker dismissed reports that Nigerian doctors worsened his injury before he left the West African country for treatment at his club base in Naples.