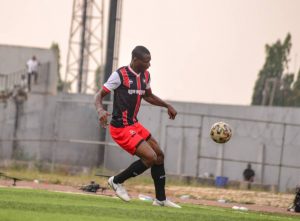 Abia Warriors and Heartland FC continued their resurgence in the  Nigeria Professional Football League(NPFL) which entered week 11.
Heading to Matchday 11, there was so much that happened as some games were suspended.
Firstly, Wikko Tourists team bus was gutted by fire en route to Akwa Ibom for their game against Dakkada FC.
Then the attack on Adamawa United team who were travelling to Lagos State to honour their tie against MFM FC.

The team driver was abducted along the Benin express road by unknown armed men.
Yet, the game still went ahead as 16 goals was scored with Heartland FC picking the only draw of the day following a 1-1stalemate against Sunshine Stars in Akure.
At the Okigwe Stadium, Abia Warriors came from a goal down and defeated Warri Wolves 4-1.
Sunday Williams scored for the Seasiders just three minutes of play.
Chukwuemeka Obioma equalized for the Warriors in the 23rd minute before Godwin Obaje first half added time goal completed the come back.
A depleted Warri Wolves side let in two more goals with Paup Samson netting a brace in the 66th and 81 minutes.
With the resounding victory, Abia Warriors have now moved out of the relegation zones for the first time since MD1 of the 2020/21 NPFL.
At the Godswil Akpabio Stadium, a Charles Atshimene’s 53rd minute goal handed Akwa United a slim 1-0 over Plateau United.
With the loss, Plateau United have now lost three consecutive NPFL matches for the first time since March 2018 and have now slipped down to the relegation zone.
A Najeem Adeyinka and Oladapo Alabi goal in the 21 and 24th minute respectively earned MFM FC a win against Adamawa United at the Agege Stadium.
The Olukoya Boys bounced back to winning ways after losing their Matchday 10 game.
For Adamawa United, they look certainly to be heading out of the NPFL next season as they are yet to record a single win this season.
Sadeeq Yusuf continued his impressive goalscoring for for Sunshine Stars as he scored in the 72 minute from the spot to deny Heartland FV from running away with the points.
Paschal Eze put Heartland FC in front just 16 minutes of play but Fidelis Ilechukwu lads could not hold tenaciously to the lead.
At the Cathedral in Enugu, a Chiamaka Madu’s 30th minute goal was all the Flying Antelopes needed to stop Kwara United unbeaten run.
FC IfeanyiUbah were ruthless against Katsina United at Nnewi scoring three goals.
Evans Obonda opened scoring in the 24th minute before Nonso Nzediegwi scored the second in the 48th minute.
Emmanuel Uchegbu put an icing to the cake in the 59th minute to fly over the Afonja Warriors
In Markurdi, Lobi Stars narrowly defeated Kano Pillars by 1-0 with Austine Ogunye in the 5th minute.
A Faisal Ahmed 63rd minute goal was all Jigawa Golden Stars needed to beat Nasarawa United.