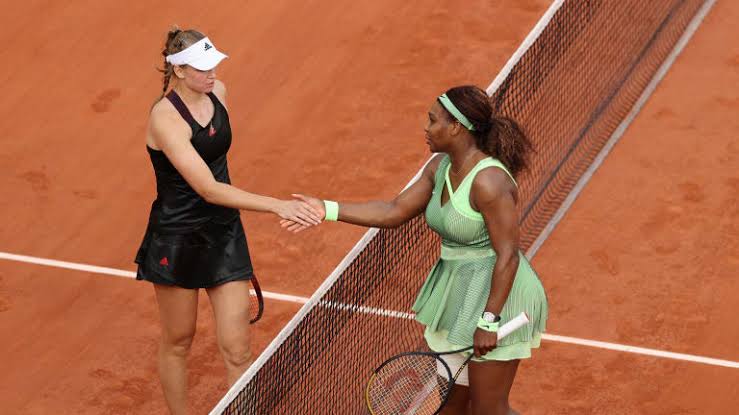 Serena Williams has been sent packing from this year’s Roland Garros in the fourth round by Kazakhstan sensation Elena Rybakina on Sunday.
Rybakina defeated the three-time champion 6-3, 7-5 to become the first tennis player in Kazakhstan to defeat Serena.

It was the WTA No.21 seed first-ever Grand Slam round of 16, while 7th-seeded Williams was contesting her 64th — the first of those coming at 1998 Roland Garros, a full year before 21-year-old Rybakina was born.

However, Rybakina exhibited the form that pulled her to four WTA singles finals and a Top 20 ranking in the first two months of 2020, and she has appeared to rekindle that fire this fortnight, where she has attained back-to-back wins for the first time since the very first week of the season.

In the first meeting between the two players, Rybakina’s one-hour and 17-minute upset of 23-time Grand Slam champion Williams came after the Kazakh converted five of her seven break points.

Williams’s 15 winners were outweighed by 19 unforced errors, as her quest for a historic 24th Grand Slam singles title will have to wait until another attempt at Wimbledon.

Williams had been 14-0 against players from Kazakhstan before Rybakina pulled off the upset.

Rybakina, now into her first Grand Slam quarterfinal, has yet to drop a set during the fortnight.

Rybakina will now face No.31 seed Anastasia Pavlyuchenkova of Russia in the quarterfinals. Pavlyuchenkova followed up her third-round upset of No.3 seed Aryna Sabalenka with another stunner of a higher-seeded Belarusian, eliminating No.15 seed Victoria Azarenka earlier on Sunday.