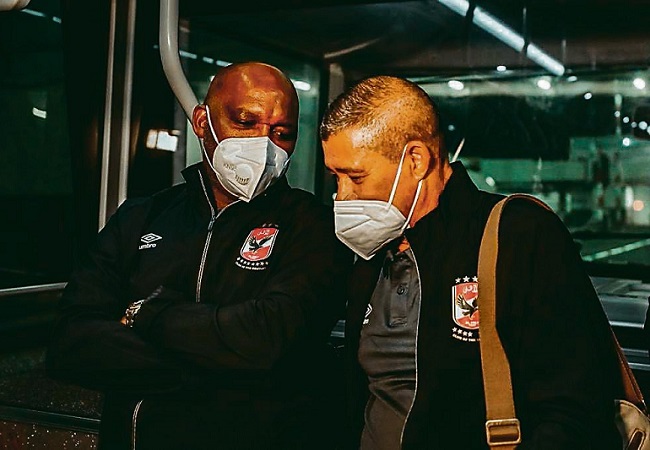 After Pitso Mosimane took charge of Al Ahly, one of his first actions was to appoint then Black Leopards manager Cavin Johnson as his assistant coach, after his first option Rhulani Mokwena opted to stay at Mamelodi Sundowns as joint-head coach.

Johnson played a major part in Al Ahly’s success during the 2020/2021 season, helping them lift five trophies out of a possible seven including the Egypt Cup and Egyptian Super Cup as well as back-to-back CAF Champions League titles and the CAF Super Cup.

However, it seems that his time in the Red Castle has come to an end as reported by Ahmed Shobier. The former Al Ahly keeper turned pundit revealed that the club are now looking for his replacement, with several options in mind.

The first one would be to promote Mosimane’s assistant coach, Samy Komsan, to the Al Ahly general manager role, previously occupied by Johnson. The second option would be to appoint a new South African coach, chosen by Mosimane.

The club are also thinking of acquiring an Egyptian general manager, with former Egypt U23 national team coach Hany Ramzy being considered for the role as well as Alaa Mayhoub.

Jonhson’s decision to leave the club came after he reportedly received an offer from an unnamed South African side.

The 62-year-old has an abundance of experience having served as first-team head coach for a number of clubs in his home country, namely Platinum Stars, SuperSport United, AmaZulu FC, and most recently Black Leopards FC.