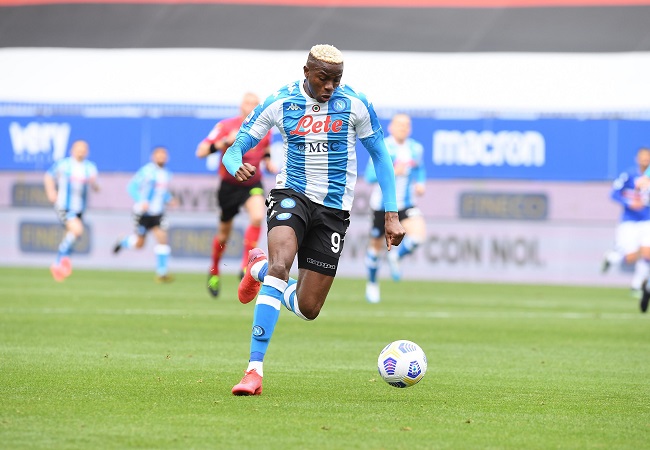 Napoli goal-scoring machine Victor Osimhen has said he hopes to have an injury-free season so that he can continue scoring for fun and ‘achieve something important this season.’

The Nigerian striker spoke about his ambition in the Europa League after bagging a brace to rescue Napoli from the jaws of defeat at King Power Stadium in England where the hosts, Leicester City, had cruised into an early two-goal lead on Thursday evening.

“I hope to have no more injuries because we have a strong group and I know we can achieve something important this season,” he told Napoli website in a post-match interview after the Europa League group stage match.

Osimhen bounced back to action recently after missing the better part of last season due to a shoulder injury following his switch from French Ligue 1 side, Lille. He was also down with Covid-19.

He said he was happy to have scored and hopes to build on such red-hot form.

“I am happy for the double and for the positive result. It was important to have started the journey in the Europa League well. I want to give everything for this shirt and I want to continue on this path to prove my worth and give my contribution to the team,” he said.

“We had some players getting their first 90 minutes of the season as well,and then obviously, their big striker (Victor Osimhen), who’s £70-odd-million, so you can see his quality, and he gets his two goals,” he said.

The 22-year-old then started the ongoing Seria A season on a bad note after picking a red card in a game against Venezia.

Napoli’s Senegalese defender Kalidou Koulibaly has since hailed the contribution of Osimhen to Thursday’s game.

“It was not easy to recover and get results on this field. We faced a good team that plays fast and vertically. We were very good at keeping the pitch and we could have even won if we looked at the whole game,” Koulibaly told Napoli website.

“Osimhen is our deadly weapon. We know his value, he grows day by day, he listens to advice and knows how to give the depth we always need.

We probably would have lost this race a few years ago, but this group showed maturity, experience and mentality. We are not afraid in the most delicate moments and this is very important.”