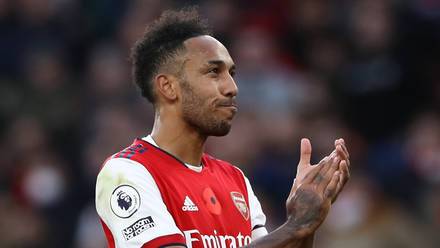 Arsenal has confirmed that it has reached a mutual agreement with Pierre-Emerick Aubameyang to depart the club putting and end to the rift between both parties.

Aubameyang was stripped of the club captain armband by the club after he was found guilty of going  against the club rules.

Arsenal in a message confirmed the departure of the former Borrusia Dortmund player who is believed to put pen to paper with Barcelona.

The Gunners in a statement on Tuesday wished Aubameyang thanked the Gabonese captain for his service.

It reads;“Pierre-Emerick Aubameyang has left the club by mutual agreement.

“Auba joined us from Borussia Dortmund in January 2018 and won the Premier League Golden Boot in his first full season in 2018/19.

“He scored both goals in the 2020 FA Cup final win over Chelsea, and scored again at Wembley as we won the FA Community Shield against Liverpool at the start of last season.

“Auba has been our captain for the past two-and-a-half seasons and made 162 appearances, scoring 92 goals in all competitions.

“The 32-year-old was named African Footballer of the Year in 2015 and won the DFB-Pokal (German Cup) in 2017 during his time with Borussia Dortmund.

“His previous clubs have been AC Milan, Dijon (loan), Lille (loan), Monaco (loan) and Saint-Etienne, together with representing Gabon 72 times.

“We wish Auba all the best for the next chapter in his career and thank him for his contribution to the club.”