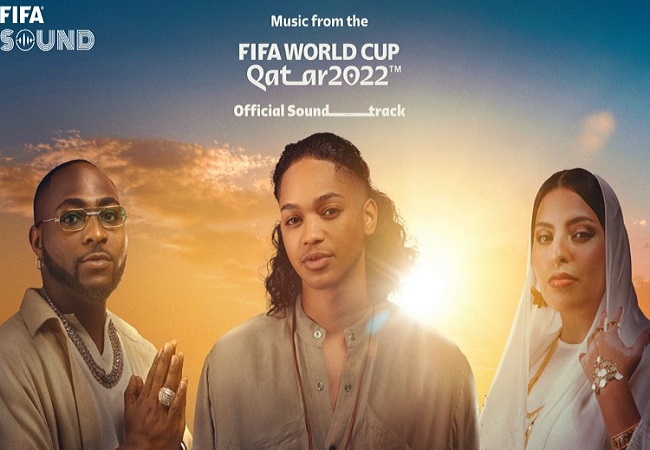 Davido made the announcement via his social media handles on Friday as he said he’s part of the song titled “Hayya Hayya” (Better Together).

The Nigerian multi-award winning singer with a rich international reputation, has a Gold records in the United States. And he has sold out the popular O2 Arena in the United Kingdom.

Considered one of Africa’s biggest musicians, Davido represents Africa on the theme song.

According to FIFA’s official website, Hayya Hayya (Better Together) by Trinidad Cardona, Davido and Aisha is the first of a selection of singles to be released from the multi-song FIFA World Cup Qatar 2022 Official Soundtrack.

The song draws on R&B and reggae influences and will play a central role in Friday night’s final draw for the tournament.

“The combination of breakthrough US star Trinidad Cardona, Afrobeats icon Davido and Qatari sensation Aisha captures the spirit of the FIFA World Cup and the FIFA Sound strategy by bringing together inspiration from across the globe.” FIFA said.

“By bringing together voices from the Americas, Africa and the Middle East, this song symbolises how music – and football – can unite the world.” FIFA Chief Commercial Officer Kay Madati said.

“As part of FIFA’s revamped music strategy, the multi-song soundtrack will bring passionate fans closer to the spirit of the FIFA World Cup like never before.”

The song was released by Def Jam Recordings and produced by Red One.

“I’ve grown up all over the world. And the more I travelled, the more I realised that we are all one, one people, one world. So, when this came to me, I jumped on it. To be a part of this event that brings together the whole world, and to be a part of this song. ‘We are better together’ went right to my heart. Beautiful, man, beautiful. How could I say no?” Davido said on his invitation to feature on the song.