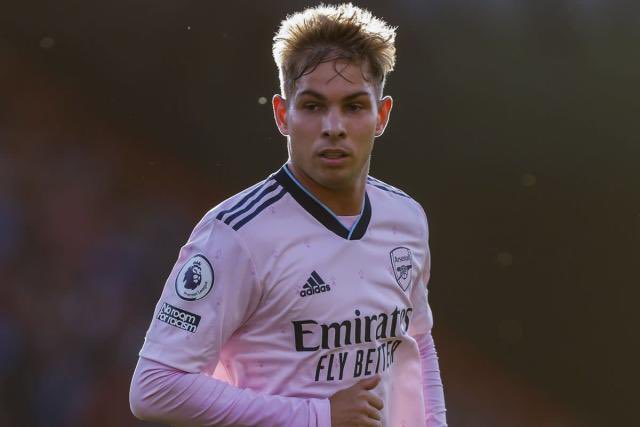 Arsenal midfielder Emile Smith Rowe has had surgery on a groin injury and the club hope he will return to training in December.
This was revealed by Arsenal on Thursday in a statement posted to their website.

“In recent months, Emile Smith Rowe has been experiencing discomfort in his groin, which has limited his training and match appearances.

“Following a significant setback at our Premier League match against Manchester United at Old Trafford on September 4, and after further specialist consultations and discussions with our medical team, Emile underwent surgery to repair a damaged tendon in his groin.

“This successful surgery took place in London in the past few days and Emile’s rehabilitation programme is already underway. We are hopeful that Emile will return to full training in December.

“Everyone at the club will now be supporting and working hard with Emile to get him back on the pitch as soon as possible.”

Smith Rowe began playing for a professional club in 2018 with Arsenal, however due to a lack of playing time, he was loaned to RB Leipzig and Huddersfield Town of the Bundesliga.

In the years that followed, he cemented his position as an important player at Arsenal.

On September 20, 2018, Smith Rowe made his first-team competitive debut for Arsenal against Vorskla Poltava in the UEFA Europa League. He replaced Alex Iwobi in the second half.

His arrival marked the first player born in the 2000s to make their professional Arsenal debut.