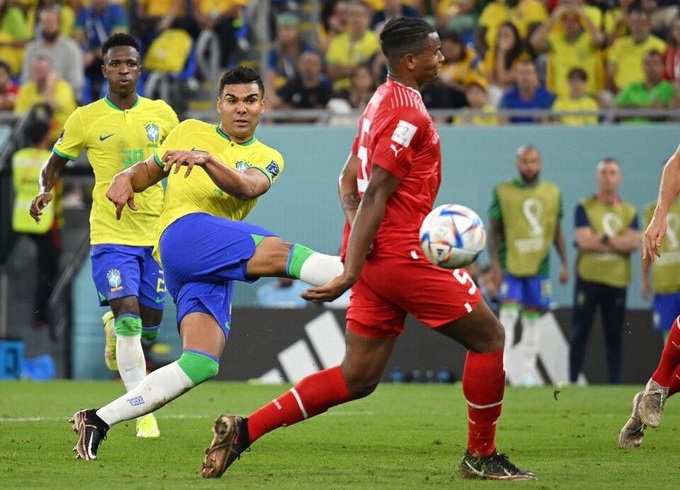 Brazil defeated Switzerland 1-0 on Monday thanks to a goal from Casemiro in overtime as the five-time champions advanced to the World Cup’s last 16 with one game remaining despite without injured star Neymar.

At Doha’s Stadium 974, the stubborn Swiss team had vexed the Brazilians, and it appeared as though they would have to settle for a draw after a VAR review denied a Vinicius Junior goal in the second half for offside.

But with seven minutes left, Casemiro of Manchester United received a flick from Rodrygo well inside the box, and his volley found the back of the net thanks to a little but crucial deflection from Manuel Akanji.

Read Also:Cameroon come from behind to snatch a resounding draw against Serbia

Only France and Tite’s team have advanced to the round of 16, and they are the only team other than the defending champions to have won both of their group games in Qatar thus far.

Brazil has six points and may be tempted to rest players for their match against Cameroon on Friday, which will determine who finishes first in Group G with a draw.

While Switzerland failed to register a shot on goal, they are still on track to qualify because they know a victory over Serbia in their final match will be enough to advance Murat Yakin’s team, although a draw may also be acceptable.

The Paris Saint-Germain star was always going to be missed by the Selecao, but coach Tite is optimistic that Neymar can heal from his ankle injury in time to participate in the finals.

The Brazilians were reminded of the depth of the European game after Richarlison’s talent made the difference in their opening victory over Serbia.

They were held by Switzerland in the group stage four years ago, but lost to Belgium in the quarterfinals.