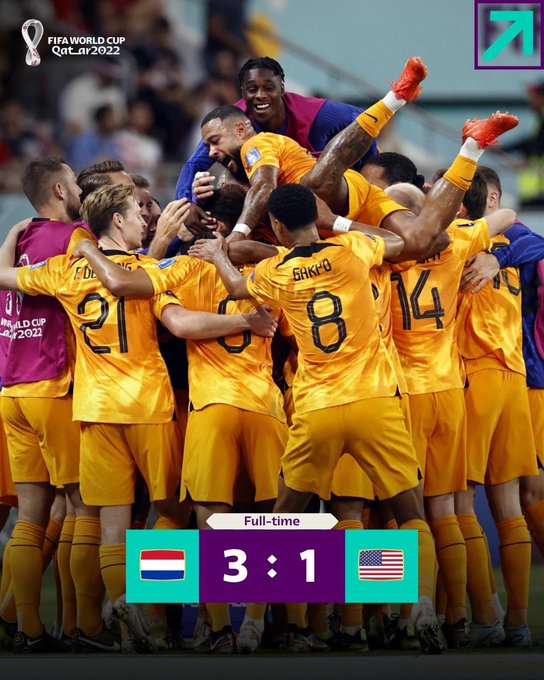 The Netherlands defeated the United States 3-1 on Saturday at the Khalifa International Stadium, thwarting their opponent’s attempts at a late comeback.

After falling behind 2-0 at the half, Dumfries put an end to any hopes the Americans had of staging a comeback, but the Americans fought back to cut the deficit in half through Haji Wright in the 76th minute.

In front of 44 846 spectators, the Dutch appeared to be easily winning the opening Round of 16 match after scoring twice in quick succession.

Depay scored the opening goal in the 10th minute after receiving a cross from the right by Dumfries, and Blind added the second goal just before halftime.

But Wright scored to give the Americans a chance at a comeback.

That only lasted for five minutes, though, as Dumfries scored in the 81st minute by heading in Blind’s left-side cross to complete a man-of-the-match performance.

However, despite reaching their seventh World Cup quarterfinal since 1974, the Netherlands’ performance in Qatar will not satisfy their adamant fans.

They occasionally shown unusual caution, played slowly, and lived precariously as they gave the Americans a lot of the ball.

They yet appeared to be slightly superior to their rivals.

As the Netherlands extended their unbeaten streak since Louis van Gaal returned as coach last year to 19 games, Cody Gakpo and Dumfries cleared off the line in the second half, and goalkeeper Andries Noppert made several saves to keep a clean sheet.

Christian Pulisic found himself free and onside with only the goalkeeper to beat, giving the Dutch a scare early on.

However, Noppert, the tallest player at the World Cup, stuck out his right leg to prevent a shock opener.

The Netherlands responded right away. After 20 deft passes, Dumfries squared the ball from the right and pulled it back into Depay’s path.

Depay delayed his run into the American penalty box and was unmarked as he slammed the opening goal.

The Dutch relaxed as they awaited opportunities to counterattack, quickly replacing the brisk beginning of the game with a more leisurely section of play.

When Sergio Dest broke through the defense but was unable to get the ball out from under his feet, he missed a good opportunity near the end of the first half.

Timothy Weah’s driving shot forced Noppert to make another save.

Those missed opportunities were swiftly made up for as the Dutch took advantage of another right-side break to score a goal that was an exact replica of the first one.

Left back Daley Blind, 32, scored in his 98th international game after Dumfries pulled back his cross.

After the break, Depay made a break for it and appeared to be setting up substitute Steven Bergwijn to make it 3-0, but he played a poor pass.

Then, an American raid up the other end ended with Gakpo saving Tim Ream from close range.

When Pulisic’s cross struck Wright on the heel and the ball looped into the net in the 75th minute, Dumfries was in the ideal position to stop it.

However, she was powerless to stop the American goal.

The Dutch will face either Argentina or Australia in the round of eight next Friday, but Dumfries ultimately proved to be the game-changing moment.