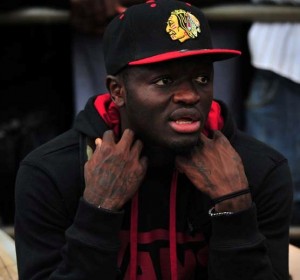 Sulley Muntari has dismissed reports that he’s been omitted from the Ghana squad for next year’s Africa Cup of Nations.

The AC Milan star is yet to kick a ball this season after he suffered a serious knee injury in June.
The 28-year-old is losing the battle to be fully fit in time for the continental showpiece with growing reports that he’s been axed from the final squad.
Ghana coach Kwesi Appiah is expected to name a provisional 25-man squad on Thursday but it’s widely believed the former Sunderland man will not make the cut due to his inability to recover in time.
But Muntari has issued a statement on Monday to pour cold water on the rumuors by insisting he remains in the plans of the Ghana trainer.
‘I’m feeling really good and with God’s will I hope to be back playing with AC Milan again next week,” Muntari said
“I want to thank everyone for their support during this time of my comeback.
“I’m working really hard and intend to be fully ready to fulfil my duties for my country for the AFCON 2013.
“The Ghana FA has not made a firm decision yet on any player, but as far as I know I am still in strong contention for a place in the team.
“ I can’t wait to get back into it and I want to give my contribution to the team.”

Muntari is an important member of the Ghana squad as his experienced will be required to help the country end a 31-year wait for an African title.