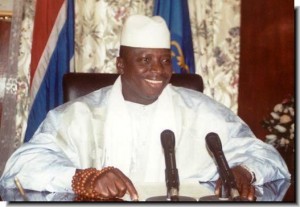 His Excellency Sheikh Professor Alhaji Dr. Yahya AJJ Jammeh was Sunday awarded a certificate for the “most generous sponsor” of football in The Gambia. The Gambian President was awarded the certificate by Gambian premier league champions Real de Banjul at its Gala Dinner and Awards Night at the Penchami Hall of the Paradise Suites Hotel in Kololi.

It is the latest of many awards that The Gambian leader received for his unwavering support to the development of sports in the country but football in particular. Jammeh himself a Real de Banjul Football Club fan is also the life patron of Gambian football.

President Jammeh was not present at the occasion but his certificate was received on his behalf by the Honourable Minister of Youth and Sports, Alieu Kebba Jammeh who amongst other important figures in Gambian football were present to grace the night.

Addressing the gathering, Minister Jammeh reaffirmed government’s continues support to the development of football in the country. According to him, Gambian football has continued to grow from strength to strength under the leadership of President Jammeh and it is not a coincidence that Professor Jammeh is the number fan.

Minister Jammeh renewed his call that The Gambia government will continue to give the maximum support in ensuring that football is well played and administered in the country. He added that there will be challenges but his presence at the awards ceremony is an indication that they are determined to do the necessary things to achieve their targets.

While wishing Real de Banjul a prosperous 2013 in its quest to defend its title and conquering Africa in the upcoming CAF Champions League, Minister Jammeh called on other clubs to emulate the move taken by Real. He therefore wished other clubs to follow suite to represent The Gambia at continental club competitions.