Rizespor forward, Uche Kalu has ruled himself out of the Nigerian squad for the Africa Cup of Nations, en.africatopsports.com can report.

Kalu has struggled to recuperate from a groin injury and has opted to leave Nigeria’s pre-Afcon camp in Faro, Portugal this weekend.

The former Enyimba forward could not train with the rest of the squad this week owing to the injury and had been placed under close supervision by the Nigerian team doctor.

He also missed out of Wednesday’s friendly against Catalonia.

On Friday, Nigeria head coach, Stephen Keshi had requested from the medical team to know the health status of the player before next week’s deadline to submit his final squad of 23 players to Caf for the Afcon in South Africa.

However, the player’s lawyer, Chike Onyeacho, has shed more light on Kalu’s decision to rule out himself from the Super Eagles’ trip to South Africa.

“Unfortunately Uche (Kalu) will take no further part in the Nations Cup preparations and competition proper because of a groin. He has opted to return to the country so that he doesn’t aggravate the injury any further”. 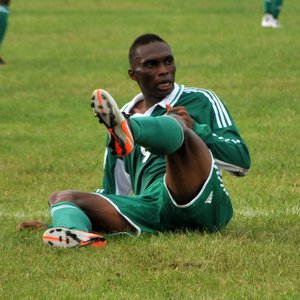 “The injury was the reason he missed the last two games of his club (Rizespor) in Turkey. Uche would have hidden the injury and probably make the Nations Cup squad but he is aware of the implications as he is still young and knows that the 2014 World Cup qualifiers and other matches are still there to play for Nigeria”.

“We are expecting him in Nigeria this weekend before he goes to his base in Turkey to treat himself properly,” said Kalu’s lawyer.

Kalu is one of the 32 players named in Nigeria’s provisional squad for the Afcon billed to kickoff from January 19.