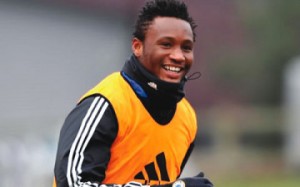 Chelsea midfielder Mikel Obi has declared that he is fit for the Africa Nations Cup holding in South Africa after a slight knee complaint.

Mikel was pulled off late in the second half of an EPL game against Norwich City after he suffered a knock on his knee.

But on Thursday he told MTNFootball.com that he was now as fit as fiddle and ready for action to douse speculations regarding his availability for this month’s continental tournament.

“I am going to be at the Nations Cup as there is nothing to worry about concerning the injury, it is over,” Mikel said.

“I am okay and fit for action. I am already looking forward to play in the FA Cup game against Southampton. I was advised by the doctor to rest it for the QPR game; otherwise I was ready to play.”

Injury ruled out the Chelsea star from the 2010 World Cup in South Africa at the last minute and the midfielder again reiterated that he will be at the Eagles training camp in Faro, Portugal, on Saturday.

“Mikel missed the Everton clash due to a knee injury, but it is not that serious,” Benitez said.

Mikel and his compatriot Victor Moses who also missed the 1-1 draw international friendly against Catalonia are billed to travel to Portugal together immediately after the cup game in England.