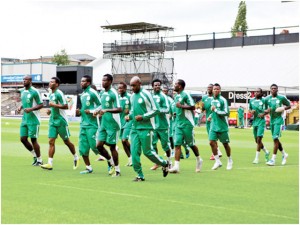 The Nigeria Football Federation is not taken chances with the health of the players as all the 23 players who made the final cut for the Nations Cup starting later this month in South Africa, were on Thursday taken for a comprehensive medical check-up in Faro, Portugal.

The medicals include scans, chest x-ray, blood tests and general health test for the players with the medical team headed by Dr Ibrahim Gyaran assisted by physiotherapist, Adewale Oladejo being very busy for the better part of the day.

The players went for the tests in batches of four and five and there are indications that the health status of the Super Eagles is very good.

Head Coach, Stephen Keshi described the exercise as routine and good for the players and the team, even though most of the players have undergone same at their various club sides.

Nigerians, who have expressed fears over the thigh strain that Super Eagles goalie suffered in the friendly against Cape Verde Wednesday, have also been told that there was no cause for alarm, as the keeper’s injury is normal and he would be ready for the tournament.

“I have been told that in two days I can resume action on the pitch, because I’m feeling very free now,” Ejide said on Wednesday evening after the routine medical tests.

Similarly, Keshi has urged Nigerian to remain supportive of the team, as there was no need to panic after the goalless draw recorded on Wednesday night against the Blue Sharks of Cape Verde.

“Yes, there were errors and mistakes here and there but in the game but the boys did very well and we must remain confident that they will deliver in South Africa.”

Keshi added that friendly games are targeted at spotting errors and shortfalls in a team, and correcting them, declaring that the technical crew has made observations and will work on them in the next one week.