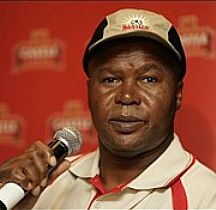 Former Angola coach Luis Oliveira Goncalves has criticised the Palancas Negra’s decision to head to the 2013 Africa Cup of Nations without a goalkeeper coach.

Angola have no specialist trainer for goalkeepers Lama, Landu and Neblu within their technical team, which is led by Uruguayan Gustavo Ferrin.

Goncalves, who took Angola to the 2006 World Cup finals in Germany and is now a vice president at Santos FC, says Angola run the risk of having their goalkeepers underprepared.

Angola start their Nations Cup Group A campaign against Morocco at Soccer City in Johannesburg on Saturday before taking on hosts South Africa in Durban and the Cape Verde Islands in Port Elizabeth.

“This is a position that requires individual training. The goalkeeper has to spend 80 percent of his training time working on his own and needs a coach to do this work with him,” Goncalves told reporters.

“This is a complicated and specialist area. Angola has enough expertise in this department and there are good trainers at the various clubs so it is strange why none have been taken to the tournament.”