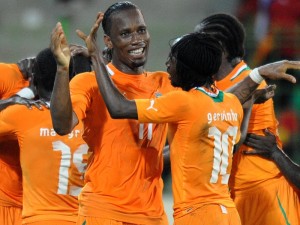 “We have a team capable of great things at the 2013 Cup of Nations,” remarked Drogba.

“It would be great to win the trophy now. Honestly, we are getting tired of losing out each time.

“We showed great solidarity against Senegal (in the qualifiers). We fought together, everybody gave of himself and this helped us to win.

“And now everybody expects a trophy. We hope to give the cup to our country.”

Drogba inspired the Elephants to reach the 2006 championship final against host Egypt and he was again instrumental as his country marched into the 2012 final against Zambia.

But on both occasions the two-time African Footballer of the Year ended up on the losing side with last year’s failure the more disappointing after he blasted a penalty over in regular time against shock winner Zambia.

Drogba is the arrow head of his country’s ‘golden generation’ that includes Yaya and Kolo Toure, Didier Zokora and Emmanuel Eboue.

And now, at 34, the tournament in South Africa is most likely to be the last hurrah for the big striker and he would wish to crown it with the ultimate victory.

The Ivorians will again be the tournament favourites as they were since 2006, when they qualified for a first FIFA World Cup.

Besides the Drogba generation, younger players like Gervinho of Arsenal, Arouna Kone of Wigan Athletic and Salomon Kalou of Lille have come into their own in this very talented team.

Yet, the hope of an entire country rests on the powerful shoulders of Drogba to inspire the Elephants to only their cup triumph after beating Ghana on penalties in the 1992 final.

In May, the charismatic striker made history when he netted the penalty that gave Chelsea an historic UEFA Champions League triumph, and he was voted the best Cote d’Ivoire footballer last year.

However, against most expectations, he was beaten to the CAF Footballer of the Year award by compatriot Yaya Toure.

In the twilight of his career, he has moved to China to cash in on his final years as a player, although rumours persist he could return to the big stage in Europe before hanging up his boots.

What is certain is that even though he now features in a backwater league, he has lost none of his predatory instincts.

Goals in the high-profile 2013 Cup of Nations qualifier against Senegal and in a recent friendly against Austria proved that.