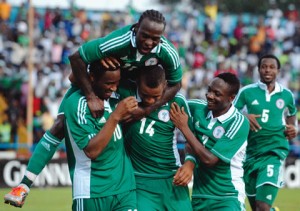 The Nigerian Super Eagles sharpened their claws by walloping Portuguese club Farense 5-0 with three days to go before the Africa Cup of Nations kicks off.

Uche Ikechukwu scored a hat-trick and Emmanuel Emenike and John Obi Mikel one each as a side that is among the favourites for the tournament in South Africa completed a four-match warm-up schedule.

Nosa Igiehor was foiled three times and Chelsea midfielder Obi twice by the woodwork with Nigeria dominating the second half after leading 1-0 at half-time, it could have been a much wider victory margin.

The country that has finished among the top three in all but three of 16 appearances drew 1-1 in Spain with Catalonia before a goalless stalemate with Cape Verde and a 1-0 win over Sparta Rotterdam in Portugal.

Nigeria are in Group C at the Africa Cup with defending champions Zambia and rank outsiders Burkina Faso and Ethiopia and it would be calamitous for the vast west African nation if they failed to make the knockout stages.