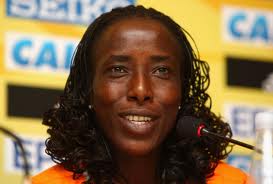 Building of a new tartan track at the Lorna Kiplagat Sports Academy was commissioned by Kenyan Sports Minister Ababu Namwanda in Iten on Saturday (12 January).
It is part of a sports complex that will include modern facilities for basketball, volleyball, tennis and hockey at a cost of over 11 million US dollars.
This is the brain child of the Kenyan-born Lorna Kiplagat a former world half marathon champion and world record holder. Kiplagat is now a citizen of the Netherlands. Kiplagat’s project has to assist young women from all over Africa realize their potential in education and athletics.
Prominent athletes who witness the historical occasion were double world 10000m and 5000m champion Vivian Cheruiyot along with the 2002 and 2003 World Junior Cross Country champions Viola Kibiwott who are natives of Iten.
Also present were Kenyan Olympic 800m champion and world record holder David Rudisha, along with Somali-born double Olympic champion Mo Farah of Britain.

Kiplagat will become the world’s first female athlete to build a privately owned modern athletics track. Some athletes may use the facility to prepare for the IAAF World Athletics Championships due in Moscow in August.
Last month Ethiopia’s multiple world record holder, Kenenisa Bekele opened his private tartan track on his training camp.