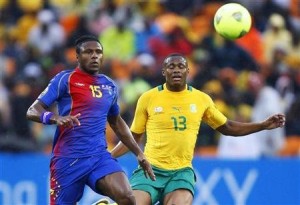 South africa goalkeeper Itumeleng Khune insists the hosts are still focused on the group stages of the Africa Cup of Nations, rather than the quarter-finals, despite sitting on the brink of qualification.

A 2-0 victory over Angola on Wednesday left them needing just a single point against Morocco in Durban on Sunday to book their way into the last eight of the competition for the first time in 11 years.

“We’re not there yet. It still has to be business as usual until Sunday,” Khune said in the build-up to the clash.

“We have to go back to the drawing board and see where we can improve.

“All the focus now has to be on that last game of the group, which will be a tough one. We’ll have to treat them with respect as they are a team which has done well in the past.”

The north Africans are former champions of the continental showpiece, having lifted the crown back in 1976. Their recent record, however, is poor and they have only once progressed beyond the first round since the 2000 finals in Ghana and Nigeria.

But Khune warned there was no room for complacency.

“This win was just a step in the right direction, but our feet have to stay on the ground.

“I’m confident that the team spirit we have now will be crucial in the next match.”

Khune kept his third clean sheet in four games against Angola, and keeping the opposition out was giving him further room for optimism.

“Obviously the confidence is high having kept two clean sheets (in the tournament), but as I said, we must stay grounded.

“We still have one to go and if I can keep another clean sheet there then that should be enough to see us through.”

He also defended his team’s performance in the opening match of the tournament, when they drew 0-0 with Cape Verde Islands, a dreary showing for which they were heavily criticised.

“The difference between the first two games was different opposition,” Khune said.

“We always plan differently for different countries. Unfortunately we couldn’t get three points against them, but we still got one.

“In the last match, we knew they (Angola) had a good striker by the name of Manucho and we dealt well with him, especially with those aerial balls. We kept one of their key players quiet and that hampered them.”

Striker Lehlohonolo Majoro, who scored the second goal against the Angolans, has been ruled out of the final group match due to a deep cut on his shin that required several stitches.

Bafana team management said the availability of midfielders Kagisho Dikgacoi (knee) and Lerato Chabangu (groin), who missed the last match, would be known later on Friday.