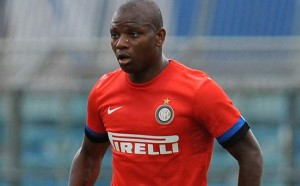 Season over for Gaby Mudingayi.

Injured on Sunday during the Serie A match between Inter Milan and Torino (2-2), Mudingayi is fixed for several weeks.

This is a blow to the midfielder, 31, who returned from a knee injury.

Former player of Bologna, Gaby Mudingayi is at Inter since the summer of 2012. He played eight games (including four as holder) with the Nerazzurri.