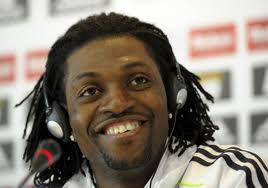 The people of Togo would yet be seeking another great performance from the Sparrow Hawks and especially the Captain Adebayor Sheyi.

Since he would be the watch out for by every citizen of the country and beyond. Togo has never got past the group phase neither making it to the quarter-finals but after defeating Algeria 2 – 0 in their last match been played at the ongoing 2013 Afcon they seem to be one point away.

Adebayor who almost opted out of the 2013 Afcon due to a disagreement between himself and officials and had to be persuaded by President Faure Gnassingbe to play in the later days of the resumption to the 2013 Afcon in South Africa.

Today he proves to be useful to his team and his countrymen (Togo), who have lots of hope in him to take the Sparrow Hawks to the promised land of winning.